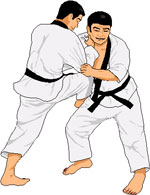 We had a client come to us recently with some negative news that had been published on a site that is well-regarded in their industry and that carries a lot of weight with the search engines (124,000 pages in Google's index).  They had been advised by one of the larger online reputation management firms that removing (or rather replacing) that result would be a 5-figure project involving the publication of many competing content pages.  Their approach was basically to beat down the search result by brute force.

So don't always think that online reputation management has to be a slug-fest between you and much larger web properties - sometime Judo is the better defense!